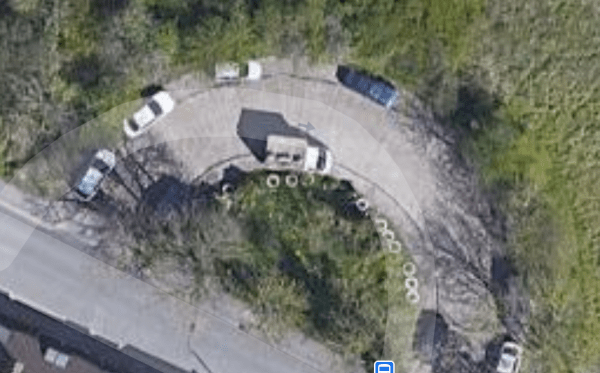 My name is Claire and I live opposite a disused bus turnaround. I have lived here a long time and as the bus turnaround is not used by the bus company or the area maintained it became very overgrown, both on the D section and the pathway and fencing round the edges, and you could not see from the road through to the back of the area. As it was unloved and overgrown it became popular with fly-tippers and any cars parked there stood a good chance of being vandalised or broken into.

I used to get frustrated and upset about what was happening and as the council were not responsible, due to it being private land, they did not get involved.

This situation weighed on my heart and I did not want to live in a place that shouted out it was unloved, that it was acceptable to dump rubbish, that it didn’t matter, and nobody cared.

Speaking to my neighbour, I found she felt the same, so we decided to take some action and one Saturday morning on went the boots, the gloves and old clothes, and across the road we went.

It was a long time ago that we started this project to tidy up our area and my neighbour had to drop out that autumn as she started a course, but as my motivation had come from God, I decided to carry on and years later I am still at it. Without that sense of it being what God wanted me to do, and having this as the driving force, there have been many times I could have given up just by the sheer enormity of the project – not something I had even considered at the beginning, due to the strong desire that God had put in my heart to see change and to get out there and start work!

Originally the idea was to clear the rubbish, cut back the overgrowth and clear the fencing of the ivy so there was visibility through to the back. But God always has more and better for us to enjoy than we envision and once the ground was cleared the possibility of turning the D into some kind of garden, for everyone to enjoy as they passed by, came into my mind. I was glad that I didn’t know all of God’s plans from the outset as I would have thought it an impossible task.

I had been wondering how to dispose of all the greenery and made this a matter of prayer. After a couple of weeks God answered in a wonderful, bountiful way through the council who had decided to introduce garden waste collection bins. So with the arrival of the bins I knocked on neighbours’ doors to explain what I was doing and to ask if they would be happy for me to use their bins. In the early days there was so much to dispose of that I would sometimes fill 6 bins in a week, so this was a wonderful provision.

As I carried on, bit by bit I received donations of bulbs and some spring plants; a passer-by wanted to contribute towards more plants and another offered to lend me some gardening tools. Two local businesses told me how they appreciated what was being done and mentioned how they had benefitted, which was a total surprise.

It no longer looks uncared for and rarely suffers from fly tipping, especially now that a neighbour is out there every day picking up the rubbish.

The D has turned into a colourful but wild spring garden and brings with it a sense of hope and life after a grey and cold winter and so I continue each year to keep on pulling up the weeds and tidy up and to be amazed at what God has done, not just for this previously unloved plot and for what is now in its place, but also for me, and how He transforms me and does not give up on me, and keeps pulling out my weeds and prunes me and makes me blossom.

When I go over there in the early spring and see the enormity of what needs doing, I focus on one area rather than being overwhelmed and giving up without having even started, and this speaks to me about my own life and the need to not be overwhelmed, to be obedient and to trust God that He will sort it all out in due time.

I felt uncomfortable for a long time as being in the street working on the plot was unusual and it drew attention. Passers-by would sometimes say ‘I don’t know why you are bothering’, and one of the funny questions I was asked on more than one occasion was ‘are you doing this because you got given community service?’

I used to go over every weekend, usually about 6.00am on a Sunday morning to pick up all the bottles and rubbish as I thought I would avoid people, but even at that time of the morning people were still out and about. I even went out in the dark one evening but still got caught out because there was a man sitting in his car and he opened his window to ask me what I was doing! God does have a sense of humour, so now I don’t worry about trying to do things in the dark – let your light shine before men…

There has hardly been a day gone by when I haven’t had a conversation with someone whilst I am over there, and now if I see someone watching me or looking I try to smile and say hello. Interestingly the words of encouragement I receive from strangers saying how it makes their day brighter looking at the flowers and how nice it is speaks to me of how God loves my community and wants to bless them and is doing just that through His beautiful creation.