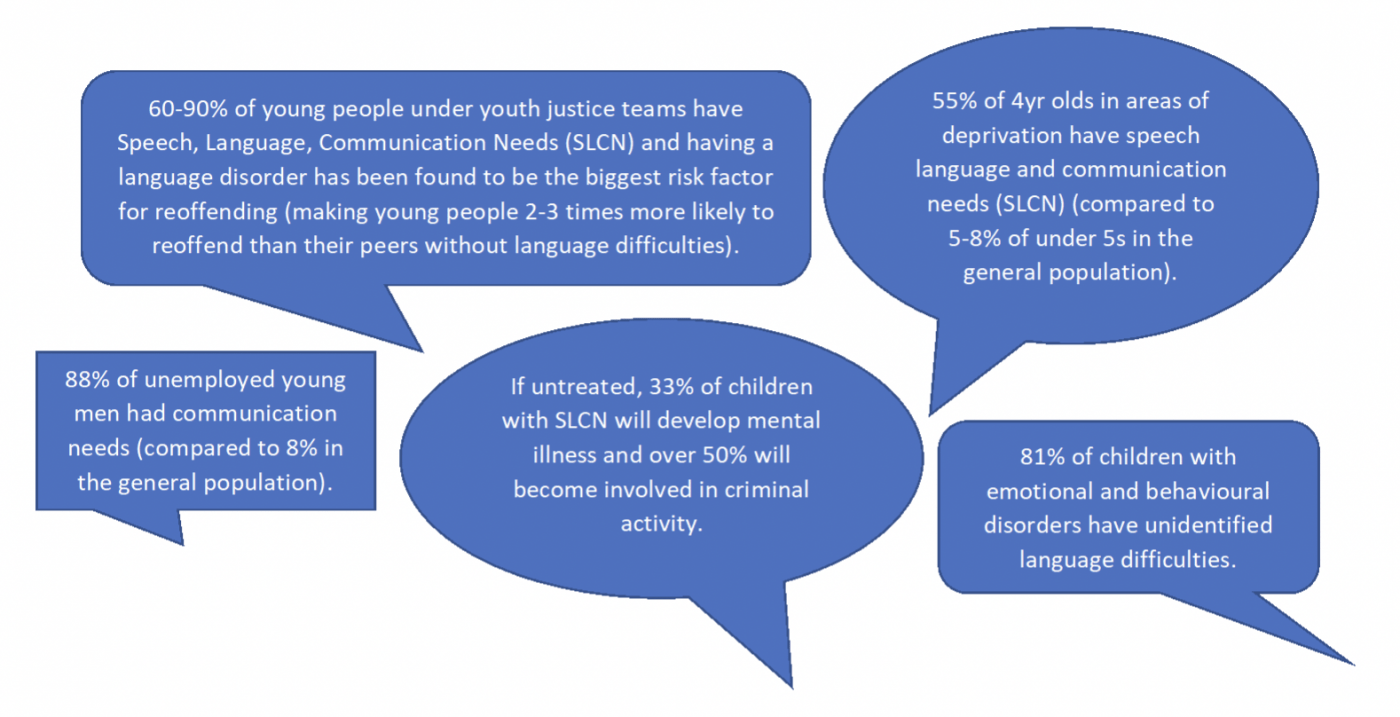 I had no idea what to expect the first time I entered through those prison gates. I was a student and got involved in prison ministry with my Uni church. One of the many things I hadn’t expected, was that seven years later God would still be watering the seed he planted in me that day.

We know our God loves justice. Isaiah 1:17 says, ‘…seek justice. Defend the oppressed…’, yet the statistics above are anything but just! The impact upon children of growing up in deprivation is complex and very often lifelong. Deprivation, trauma, speech and language difficulties, and mental ill-health, are all too common in the justice system and often tightly interlinked with each other and passed between generations.

I work as a Speech and Language Therapist, (a job I believe God very much positioned me into) currently working half my week in Community Paediatrics (with 0-19 year-olds) and the other half as part of a Youth Offending/Justice Team, so I see those statistics above in real life on a daily basis. The longer I do the job, the more I see the recurring themes, and it’s heart breaking. Having speech and language difficulties impacts your ability to access education, social relationships, and employment – all of which is damaging to your self-esteem and subsequently your mental health. Children and young people who struggle with understanding and using language, often mask these difficulties so as not to seem ‘stupid’ and that can be misunderstood as ‘acting up’, often leading to exclusions and lack of academic attainment, all putting the young person more at risk of becoming involved in offending behaviours (a cycle now known as the ‘school to prison pipeline’).

It breaks my heart (and I believe breaks God’s heart too) to see young people end up in the justice system, when so often they weren’t given a fair start in life in the first place (often because of a mixture of factors). That’s not justice.

I have only very recently started talking with people about possible ideas I have around this topic and have been really encouraged by the conversations that has led to and the faith other people have carried for my vision too. In the Think’n’Test (TNT) workshops we did as a church a few months ago, I went to the one on ‘Transforming Communities’, which made me think more widely about aspects of myself and my personality that I need to be more open to God changing/moulding, in order to allow him to use me for His glory in this. Around that time, I was also asked to join one of the envisioning workshops to think about possible visions for how God might have us use our new church building, which got me wondering whether there might be some way of overlapping the cause I care so much about, with the wider community vision that we have as a church for that space.

Sometimes, looking at the facts, witnessing the impacts, and wondering what I could possibly do to help, can feel pretty overwhelming and hopeless, but just as our God is a God of justice, he is also a God of hope and that’s a word He keeps bringing me back to. Hope is what is so needed in the trap of that intergenerational cycle, and if God has got a role for me to play in bringing that hope, I want in!

I know these are big and complex issues, with so many influencing and deep-rooted factors, but I have seen God do amazing things in seemingly impossible situations before (for example bringing men in prison to faith and breaking the intergenerational cycles of offending for their sons outside of prison through the prayers prayed inside), so I have faith that with God, even those things which are humanly impossible can happen.

I don’t 100% know yet what that might look like, but when I look back at how God has gradually laid out the steps towards it so far, and opened up opportunities, I am reminded that I don’t need to know all the answers right now, I just need to keep trusting, listening and walking with Him and enjoy seeing what He does.